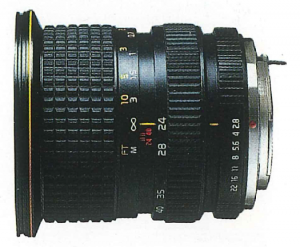 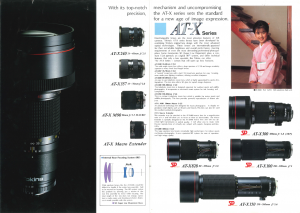 It is difficult to find out much information about the Tokina AT-X 24-40mm f2.8 – when it was manufactured and for how long etc – but generally it is easy to find a lot of positive talk about its quality – both optically and mechanically. The lens belongs to the ‘AT-X’ line of Tokina lenses which is – according to Wikipedia – its ‘consumer’ line. However, the definition of Tokina’s ‘AT-X Pro’ line is a constant aperture and they often feature an orange ring (like Canon’s famous red line indicating an L series lens); this lens has both. Perhaps this was an early AT-X pro lens, but before the official label was introduced?

Irrespective of its label the Tokina AT-X 24-40mm f2.8 is extremely well made, features buttery smooth focus and zoom rings and is big and heavy (17 elements). Its constant aperture of f2.8 makes it a reasonable option for low light work as well as more traditional landscape work – this saves carrying two lenses in your bag in most cases.

I have no real idea of the value of this lens because they appear to be quite rare. I bought it from a rather unusual source and the description was a little vague with regards to the optical condition so I had to take a little bit of a gamble (it turned out to be immaculate) so I feel I paid a very good price for such a useful lens.

The handling for this lens is really nice, it just feels right in the hand. The lens seems very sharp even wide open and when stopped down performs very well on the Sony NEX 5N. Some comments online point out that the Tokina AT-X 24-40mm f2.8 suffers from distortion at 24mm, but some point out that this is largely in the corners and as a full frame lens on a cropped sensor this should be less of a problem. I would rarely use the lens where distortion would be visible so it probably won’t be something that I would notice – but if I see anything I’ll comment on it in future.

The lens suffers from flare when pointed at a bright sunset, however, moving the lens around can really minimise just how much flare is visible. The hood is crucial for most situations at the front element is very exposed without it to unwanted light from around the lens.