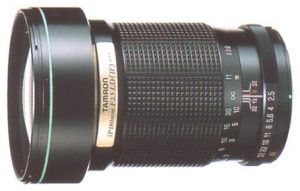 The Tamron Adaptall-2 SP 180mm LD IF (63B) is a professional grade fast portrait lens featuring internal focusing and two low dispersion elements. It was first produced in 1988 and formed part of Tamron’s 35th anniversary celebrations. Initially only 3,000 special anniversary editions were manufactured, however, the lens is available without the anniversary badging and both lenses are optically identical. 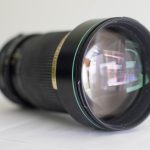 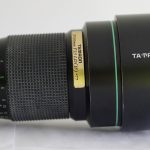 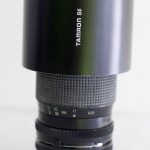 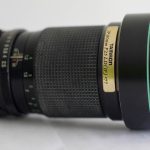 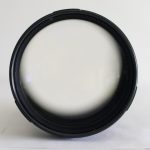 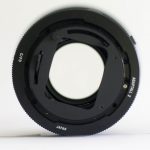 It is worth noting that the 80-200mm only includes one LD element, whilst the other lenses in the range each contain two. This exclusive range of four lenses was marketed together with the green stripe being used on each lens, but two distinctive styles split the smaller lenses from the large primes. The smaller lenses are black, whilst the large primes are olive green – and share the same lens hood. However, the 300mm f2.8 lens had two different variants: an earlier – very rare – white version with a red stripe (107B) reminiscent of Canon L telephotos and a later version (360B) which was all-black and styled according to the range at the time. It was the 360B which was eventually adapted to the autofocus model.

This lens is relatively hard to track down and comes in two distinct forms: the standard SP 180mm and the Anniversary edition – which was limited to just 3,000 lenses. The anniversary lens tends to attract a premium over the non-anniversary, but optically they are indentical. Expect to see a them crop up occasionally on Ebay, but don’t expect many as an auction. More often than not they are listed with very high Buy-It-Now only prices. Try to ensure it has the original lens hood as I have never seen one for sale separately. This lens has an absolutely stellar reputation whether it is used on film or digital. It is widely regarded as one of the finest lenses at or around this focal length and is renown for being a beautiful lens to handle. It is also, given its pedigree, remarkable value. Camera Weekly tested the lens upon release and claimed it could ‘comfortably outperform just about every film on the market’ and the price of the lens when reviewed was £500 ($1082) – a lot of money in 1988.

This lens deserves the glowing reviews. It is beautifully balanced, the focus ring is perfectly smooth and light (but not over-light) and objects pop into focus quickly – and when you nail the focus the result is a razor sharp image. Like all Tamron lenses from this era there is plenty of Purple fringing in high-contrast situations (even two LD elements cannot eliminate this problem with digital sensors) but I’ve not encountered anything that Lightroom hasn’t been able to deal with yet. It also must be noted, that the Tamron SP glass with LD elements do fair a lot better than those without.

It is much, much lighter and more compact than the superb Tamron SP 80-200mm f2.8 LD – which means although the zoom is more flexible and covers the same focal length, you can justify owning both as the SP 180mm is a much easier lens to carry around. I find it is a good wildlife lens for when light is poor and you don’t want to carry a much heavier 300mm f2.8 lens around. I imagine it could make a stunning lens for m4/3 users, with the 2x crop factor making it a 360mm f2.5 lens.

This site uses Akismet to reduce spam. Learn how your comment data is processed.